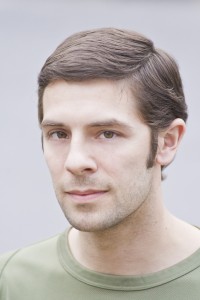 It is with great excitement that I write to you about the on-camera host for DT Daily posting I saw on Craigslist yesterday. After returning home from work I recorded and edited a DT Daily sample about the latest Google Glass news so you can get a feel for my presence on camera. You can view the unlisted video above.

When teaching I like to lead off with a tidbit that my first computer was a Tandy and since then technology has been an integral part of my life. Soon after graduating with a BS in MIS I found myself on a stage performing theater. I wanted to learn more so I pursued both interests at Sarah Lawrence College (SLC) where I’ve been researching and presenting technology to students, faculty and staff for just over eleven years. While working at SLC I also obtained an MFA in acting and was honored to be the speaker for the graduate class.

I’ve been working in front of a camera for just over ten years. During that time I have created a documentary style web series titled “Cast to Curtain”, I’ve worked with web TV shows like Tango Dango’s “Now Screening”, I starred in the feature film “Rising Star” and I even tested an informal news format similar to DT Daily in a series called “Breakfast Smoothie Time.” Both “Cast to Curtain” and “Breakfast Smoothie Time” are available on my YouTube channel.

Due to my background being what it is, I thought it would be more helpful to include only one resume so I have attached my acting resume. If there is interest in my business and technology background it can be found on Linkedin.

It would be a thrill to take two of my longtime passions and marry them together as an on-camera host for DT Daily. I am also happy to have found Digitaltrends.com via this job posting. I like to stay current with tech news so I promptly added it to my Feedly. As of March 1st, I’ll be a permanent resident of Portland, Oregon and would be happy to meet online or in-person in the Portland office, or before March 1st in the New York office, at your convenience.

I would like to thank you for your time as well as your consideration and look forward to speaking with further about Digital Trends and the on-camera host position.