Not too ago I found myself wobbling around like a weeble in a bar. My eyes were wandering around on their own as if someone else were controlling them and my mind felt like it was going to fall out the back of my head.

It was my first worthwhlie, albeit highly time sensitive, movie shoot. The added bonus was that Marty, the writer/director, had asked me to look as tired as I could. Mission ACCOMPLISH in font size 72. I stayed up untill 3 AM reading the script I received at 12 AM and browsing the web trying to stay up as long as possible for m’boy. Bright and early me mudda, emma, and I got ready to head down to Naugatuck for Dziadz’s wake. It was one helluva morning.

The wake was very welcoming. Everyone in the family was… dare I say… Chipper. It was a peaceful, warm, comforting wake. And hot damn it was nice to see the entire Ploski fam standing in the same room again.

The most annoying thing I found out about after emma and I left the wake regarded a comment someone made about me. “Is he hung over?” Granted, that made me smile because I wanted to look tired and I know I was mentally, well, lalala-ing, but come on… Hung over?! WTF mate!

Anyone that KNOWS me is aware of my drinking habits… Milk – check. Water – check. Alcohol – ENNNH! Not on the board. = P to you mr./ms./mrs. asker of such a silly question. Grumble, grumble.

I imagined a long day. My expectations fit within the 12-14 hours time frame. I was, simply, wrong. Wrong in the way that a bird has flown into the window Wrong. BAM! Ow, where’d that come from kinda wrong. It was 4:30 AM – the next day kiddies – when I finally heard Marty say “That’s a wrap.” Er… yea, something like that. It may have been more profound or even less profound or jargony or something. All I knew was that my job was done. My part in the “fun” was over. It was time to sleep.

What a wonderful sound it was – Mr. Thump. Hello Mr. Pillow. Oh, hello there Mr. Head. Let’s meditate for a while. What do you think? Suuuuure… thump.

Many hours later I awoke and began to wonder about the movie. How would it be? Would it be completed in time? Would it… gasp… win?!

Well, many weeks later all the questions have been answered. It’s damn good. Especially considering the time frame to write, film, and edit the sucka – 48 hours. Yes! It was completed and submitted to the judges in Boston by 700 PM on Sunday. Win?! No, sadly it did not win the audience award or the best in group award. Interestingly though, it will be showing at the The Greenwich Arts Center located on 299 Greenwich Ave, Greenwich, CT on May 14th at 700 PM. If you’re in the area and would like to see it, as well as many other short films, stop by. Here’s the web addy: http://www.greenwichmicrocinema.com

Now that I’ve had some time to reflect on the film and have shown it to many a pair of eyes I feel comfortable writing about my impressions and experience. Ahhh…

Film. What an odd medium. Having just finished a run of Chehkov’s ‘A Marriage Proposal’ I can say, at the present time, that my primary interest is live theater. It’s a wonderful having a performance at the tip of my fingers but it lacks… participation. It lacks the energy that an audience has during a live show. I’m running on about live theater… Blah.

Film… Well, this project was every bit a learning experience as it was a mind trip. I’ve been playing so many drunkards lately I’m a bit aghast really. Hell, even in the Chehkov piece. Maybe I should start drinking, apparently everyone else thinks I am. = O

I don’t like watching myself on screen. I feel like nearly everything I did or said was overacted or bland. Note I said nearly everything. There were some moments that I enjoyed. Honestly the editing near the end was my favorite part of the film. Heh, when death watches you, you better be cautious.

Performing each bit of dialog was frustrating for both BT and I. Because of the filming process there was no momentum in our opinion. Why? Well, we’re both accustomed to… you got it, live theater. Yea, yea, yea. We jumped from section to section of dialog only to return to a previous section only to go to the end and then back to somewhere in the middle. Brain eff. Ahhhhh! Remember, I was working on 4 hours sleep and this was happening at about 11 or 12 in the evening. Brain eff!

Side note thought. A few people praised me for my drunkenness which was… nice? Mmm, t’was good. I’ve wondered if I’d ever be able to manage something I’ve never known – being drunk. After hearing that I “do a good drunk” from people that know the feeling, I smile a bit more. Neat! 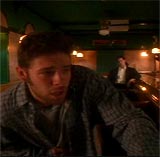 All in all, I know I enjoyed the process. Would I like to do it again… Yes. But, not under the time constraints we worked with during this shoot. A 6 hour shoot I can handle EASILY now. Hell, even 12 hours. When you hit 19+ hours you’re brain kinda goes kooky.

So, if you haven’t seen it yet, check out “The Last Shot” online still (I hope) at: http://jacobib.com/uploads/thelastshot.zip It’s a BIG file – 108 MB