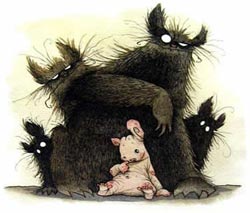 And so there it was. Hanging. Motionless. Tagless. Nobody had claimed it. Oh my wow. Surrounding it were rows of other intensely incredible killer work by a soon to be household name within the comic and children’s book world – Gris Grimly. Of course we all know that his real name is… Shoot, I promised I wouldn’t tell. 0= o.

And so the The Art of Gris Gimly Show went on with the amazing (pun, yea I know) MAD HARE watching over all the pretty EYELESS people. And what was I doing through all of this? Why, I was making a friend, or rather, as Emma put it – Gris was making a friend. = ) It was SO UTTERLY VERY COOL! Utterly!

He’s a quite guy… Well, in that environment he was. He was quiet until I mentioned Sam Keith. At that point the night changed. He knew he wasn’t talking to some money kind-a guy. Hell no! He was talking to a down and out comic book junkie that just needed a fix of the newest street drug. Hoooooooooooooooooooooo! I got a fixin that evening. After we met Gris and I started parrying names back and forth only to have a friggin autograph get in the way. WTF autographee! Grr! We’re talking here! A few minutes later, he was pulled into more than an autograph, Gris returned and thanked me for not mentioning the name Tim Burton.

Tim who? = o Of course I know Tim Burton but they have completely different techniques and style. Damn you ‘the masses’ needing a name to attach to utterly, say wha wha? – utterly rockin artwork. He’s got his own thing going on and people are noticing. Why… a Mr. Neil Gaiman will be producing a book with him in 2006 or 2007 – whenever Gris is able to sit and pen the art. Yup, yup, yup.

Oh yea. We chatted some more and more and more. It really was like Emma described – Gris did make a friend. How? We share similar interests and passion. While I’m not an artist I can see where he was influenced because I was influenced by the same people. Hell, he’s 26, I’m 29, we grew up watching the same T.V. hearing the same news, etc. We’re a part of the same generation. What else could be better? Why… He wants to get into the comic world. Well, with his name growing in strength I’m sure he’ll see a book of his own soon. If a book like a David Mack’s Kabuki can rope in an audience the way it does I’m certain Gris’s storytelling and art would do the same thing.

It was such a great night.

Such a great night.

Thank you Heidi and thank you Emma for a… you know the rest.

That pic at the top of the page? It’s called “Fuzzy Wuzzy”. The famous Fuzzy Wuzzy from the children’s song:

Well, the famous Fuzzy Wuzzy was signed by Gris for for my birthday. Thanks Emma! Wink wink nudge nudge.