About 1.5 weeks after I was called to pick up my PowerBook I made my way to The Westchester. Armed with business card and a horrible experience at hand I planned to speak with a manager. What a waste of time it turned out to be.

I advised him of the 3 hour wait. I advised him of the fact that this was after my appointment time. I advised him of the 1 week and 1 day shipment of my PowerBook. His responses? Paraphrased… Wow that’s strange. 1 week and 1 day. Huh. That is strange. And… I stand by the 15 minute policy for the Genius Bar.(NOTE: Reservations for any equipment are scheduled in 15 minute increments.) And, AND, when I said I worked at SLC and had a large staff working for me and that I worked in the Office of Academic Computing he barely blinked. When I said I’ve been telling people about my experience he had the gaul to say “I hope you’ve had good experiences as well.” W!T!F!

I don’t think he heard a word I said. So, like I wrote earlier – A waste of time.

So, I figured what the hell. Why not. >Click< Sunday evening I began the process noted on pbfixit.com to install the new logic board and bottom case shielding I had purchased. So what if my warranty would be 86’d. I wasn’t getting any help from support anyway. Pff… Next!

Step one, step two, step three. Heck this is going to be easy and fun. Hmm, that was strange I thought. When I “remove(d) the long black Phillips screw next to the memory card” it turned as though it had never been removed before. Strange. Ah well, no big deal. Unless. Nah. No big deal. Step 4, step 5… Um, Okay. There’s a problem now. This doesn’t look right. 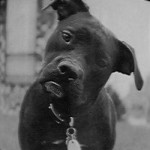 Three technicians later I learned the following:
1 – My PowerBook had never been opened by a technician.
2 – The technician had determined that my logicboard was bad because there were some dents in the casing. Apple will replace this part for a small fee of $950+tax. That’s all.
3 – This is normal! I spoke with an Authorize Apple repair technician recently and he said this happens often. Thanks for the heads up Mr. MD.
4 – I have no recourse because a technician has already determined that my logic board is bad. Yes! Even though he didn’t actually TEST it!
5 – There is no way in hell I’m promoting Apple hardware to friends, family, classmates, employees, faculty, fellow staff members, etc! Eff no.

Apple is fast becoming what I never thought… A money based company. Their legions of fans zealots loyal customers have been raped taken advantage of financially by Jobs and crew for years and years now due to their proprietary hardware designs. Now, with a 50% profit margin on the Nano and other devices, it’s possible to see where the company is going. They want money. A whole lotta spending money. And they don’t appear to care about support. Sorry ladies and gents but it’s the truth.

Of course if your iPod has a problem they’ll swap it out for you since they’re making buckets of money on each sale. Anything else… Ha. Expect a fight or worse, expect apathy.

I hold fast to one thing Apple related – OS X. It’s wonderful. I am bubbling with anticipation with the hopes that OS X will port over to the rest of the PC market. It may take a few hacks tweaks but it will definitely be worth the time spent.

Here’s a brief from dynamism.com: The Panasonic R4 is a sleek 2.2lb (999g) ultra-portable with a 9 hour battery life. Its Pentium-M 1.2ghz Dolan processor, 100gb HDD, and 1gb RAM (max) provide plenty of power. The 10.4″ XGA TFT and 17mm keypitch keyboard are rare when compared to other ~2.2 pound notebooks; the battery life is simply unchallenged. The Panasonic R4 is the successor to the popular Panasonic R3.