Yesterday Jacek and I learned that there are very few ATMs in Japan that work with American Visa cards and/or bank cards.

Check out this site http://usa.visa.com/personal/using_visa/index.htmlbefore you go. Trust me! Check it before you go.

We went to at least 15 ATMS in various parts of Tokyo – Ueno, Akihabara, and finally Tokyo. Where was the first location the ATM worked? Well… in the Tokyo Central Post Office of course. Aint life grand. And frustrating. Later Kazi mentioned that it’s similar in the US for Japanese Visa cards. The question now is – Who or what is the reason for this silliness? So odd.

During the many, many, many, ATM attempts we did visit Ueno – where I found a plethora of toys (hehehehehe), Akihabara – where we found that there weren’t many ‘new’ techy toys that we haven’t already seen, and Tokyo – where we walked and walked until we found Bic Camera. Mamma mia of a store I must say. Hot damn. The best thing about the store… LOL, was the second floor. On it we found speakers, receivers, and alcohol. You read that right faithful monkey – alcohol. Honestly, I was a bit confused. The Japanese throw me for a loop every now and then and it looks like THIS was one of those times. LOL – I think the alcohol is for the frustrated audiophile. When things get frustrating… Sometimes… You just need a drink. 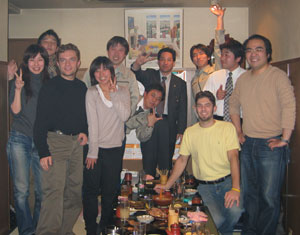 After that we stumbled onto a spinning restaurant – The Ginza Sky Lounge. The view was brilliant and the food was… enh. Fortunately it was a snack give our legs a break stop or I would have been a bit tweaked.

Kazi had printed out soe directions for us in the AM which was really nice of him. The problem we found was that we had NO IDEA how to read it. Take a look here. Needless to say we got lost. Fortunately there are maps in Japan (some friends will understand this other asian country reference). = ) At one point we attempted to as if we were going the right way and some dude tried telling us where to go. After a few attempts he brought us to the office. Amazingly kind and totally cool. We found our way in through the back, rose up in the elevator, and then went back down to a New Years Party.

The smoke was everywhere and the food kept pouring in. It was mmm mmm good. Chicken, mushrooms, chicken heart, okonomiyaki, a mini-mountain of salad, and a whole bunch of drinks and laughs. We had a great time with Kazi’s sales and engineer peeps. The night ended with a new company policy “See you in Hawaii.” 0= ) I offred up the idea to one of the sales guys with the thought of “opening a new market” while enjoying the sun. Hey, it could happen. Maybe. Um… Hmm, mayyyybe. = D

We ALL crashed on the train. Jacek and Kazi were out – and I mean OUT – until we got to Kita-Sakado. Fortunately I woke up 2 or 3 stops before or we would have been in a taxi finding our way back to Kazi’s place. It was one hell of a bitterly cold night so any additional time outside was absolutely not desired.

It’s 10AM on the 12th and I’ve written a new post but didn’t get a chance to put the new pix up yet. Well, except for the one pic in this post. Enjoy the others. I’ve got a video from last night to put up too. It’s short but that’ll make it easier on you dial-up’rs.