Having been open for approximately 5 years I finally made it to the Studio Ghibli Museum – based on Haiyao Miyazaki’s animation. Once we made it in all three of us were blown away by one exhibit in which strobes lights were used to create motion. Think flip-book in 3D. The Grey Totoro jumped, while the White Totoro walked around and eventually climbed into the tree in the middle of the exhibit. Above the Cat Bus ran around (in the opposite direction of everything else) and a cat bat flew by with a happy grin. It was such a brilliant use of strobe lights. Toward the end of this room everything was put together so that everyone had a better understanding of animation and how it relates to film – many, many, many stills, flashing light, and one big screen make you happily entertained. All done without you ever knowing why. Brilliant! 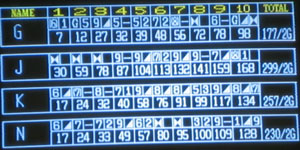 At the entrance Kazi translated for us a letter written to us – the visitor. It was quite long but the method used was what stood out to Kazi hence the reason he told us what he wrote. In regard to photography and video his letter went something like this: Thank you for coming. While you walk around the exhibit I would kindly ask of you to keep within you the pictures and memories you see here as they are the true sources of enjoyment. A picture is not able to carry with it the joy you had while experiencing the moment originally.

Such a kind way to say “No cameras or recording devices”. Hmm, yea. A true role model and inspiration in a time where we have so few. Along with the Pixar creators who had an exhibit in the museum while I was there, thank you for your years of inspiration and creativity. 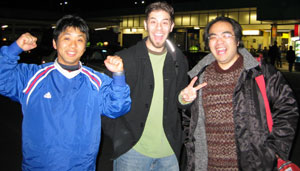 Moving on to less child based fun we met up with Takanaka! Of course that’s an arguable statement since the first thing he said to me was “Hey mother fucker what are you doing!?” Heh, Nori rocks. Nori update – He’s working on the American Bse (Golf Course)in Yagota, is marries and has one child named Yousei. He seems like the Nori of old and he’s re-learning much of his English because he’s around so many Americans.

While driving around I asked Nori if being a father felt much different and learned something very unique to Japanese culture (compared to American culture of course). I asked him “So Nor, how does it feel to be a dad?” His response “Ehh, not so different. Nothing’s changed except I have to support him now ya know?”

Not so different?! I’ve never heard a dad say that before. Especially about a son. ESPECIALLY about a son. Kazi chimed in and told me that he’s used to hearing dad’s say that in Japan and added a bit more explaining when a dad in Japan “feels” the difference. When? Well, when their child is able to talk/walk – about 2 years old, dad’s in Japan start to participate. According to Kazi and Nori this is normal. How about that! Who’da thunk it! We bowled, I lost… twice. No surprise there. I think my scores were 79 and 98. Pretty good considering I gutter balled twice in the second game. Though, I did finish with back to back strikes. Nobody saw that coming, especially me. Yousei slept through the whole bowling experience. This included yelling, music, and of course, smoke. Sigh to the smoke. Big. Ol. Sigh. On the way back to the station Takanaka proved that he STILL gets lost even though he has a GPS in the car. HAHAHA! Still! Ah Nor, you’re so all good. 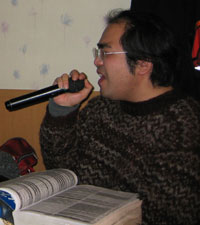 It didn’t end there! Oh no. No. No. NO! It was time for Jacek’s intro to KARAOKEEEEE! We planned on staying an hour but Jacek was ready for more and said “sure, one more hour.” The tunes were rocked, the pix were taken, and the camera was rolling for each of us. Haha! Kazi kicked it to Nirvana, Jacek took on Bryan Adams and I strolled along with ‘My Girl’. Yes, I have proof of all of this. Bwahahaha. Jacek states at one point that it’s “not going on the web site.” I have one word to reply with… MWAAAAHAHAHAHAHAHA! God it felt good to sing again.

I took on Eminem’s ‘Lose Yourself’ – HELLUVASONG to keep up with! I had never been witness to the lyrics until last night. Honestly, I was damn proud of myself. I think I’m going to try it again actually. Heh. Megadeth’s ‘Hanger 18’ – I channeled Dave. It felt great. Sadly there’s too much music in this tune. Maybe another Megadeth tune? Hmm… Linkin Park’s ‘Somewhere I Belong’ – God I wish someone else was into these guys. It was UBER rough doing both parts of this song especially since I changed style with both voices. It was rough but it ROCKED! Anthrax’s ‘Alone’ was a surprise to me. I hadn’t sung it in ages, and it showed for the first half of the tune but it was so much fun to sing.

Of course I HAD TO rock on to Jon Bon Jovi’s ‘Blaze of Glory’. If you know me and karaoke you know I love singing this tune. It’s a rough sucka but I’ve managed to kick its ass a few times. Last night was one of those nights! With only a few (for certain) missed notes I did what I’d hoped – my voice didn’t fail me during the last few blaze of glory’s. On a TOTALLY different karaoke note I tried out Jewel’s ‘Foolish Games’. It felt really good to sing, another I’m going to try again. Jacek actually let out a comment, knowingly or unknowingly I dunno, after I finished. With a subtle shocked look on his face “Wow.” slipped out. I took that as a successful attempt indEEd. It was one of the first 3 or 4 I sang too which made it even better. 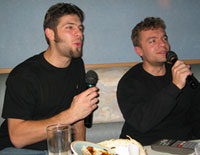 Hot damn what a great day. Miyazaki, Nori, and Jon Bon Jovi all rolled up into one. All that and we were back at the homestead before midnight! Though, heheheh, it was a SOLID 12 hour day but HOT DIGGITY DIGGITY (with 40 size font diggitys) it was a great day. I reached the land of Z after Emma watched a vid that was recorded for her during the day. She’s happily in my thoughts while I walk around Nippon. If only she could be here. Though, heh, she’d be needin LOTSA layers ’cause it’s been FRI-GID! Regardless of that semi-large detail, it’d be nice if she could have been there for the recording instead of having to watch it while I was already a day ahead of her. = O Time zones can be cool.