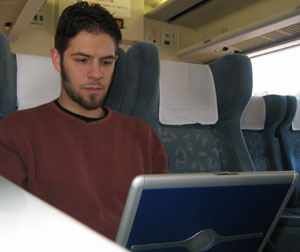 Since I got to bed close to two thanks to some downloading issues for a particular video waking up this AM wasn’t the easiest of the trip. Then again, when is waking up at 7ish, during a vacation easy?

I don’t see any hands in the air, that’s because there really isn’t a reason to get up that early. Lesson learned. Move on to chapter two class.

Ninja’s are cooler than you thought! They used gun powder (yes in guns) well before it was in vogue here in Nippon. Talk about seeing the curve and staying ahead. Those guys were lethal. Er, wait a minute, yea, lethal. = O We had a pretty good time wandering around ‘Edo Wonderland’ learning about old school Nippon through ninja shows and theater. I saw theater in Nippon! Granted it wasn’t top-o-the-top theater but it was theater! Yosh!

The adventure was worth if for the experience. But if I had to choos between Nikko’s monkeys and Nikko’s ninjas I’d choose the monkeys. It felt too theme parky even though it was a far cry from a theme park. Yes there were kids and most things were geared toward them but it was a bit too much for lil ol me. I did manage to snag some decent pix and some video footage of the show. Hehehe. I saw Japanese theater and even understood some of it too. 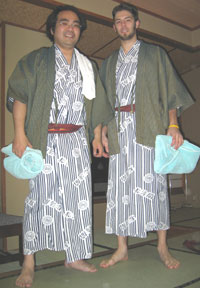 Here at the Green Palace (where the the yukata sport my initials – look closely at the pic) the onsen welcomed us (Kazi and I) to some much needed warmth after a “short walk” to the local 7-11. Actually it was described as “a short drive”. Our guess was that the woman giving the directions drives at a regular speed of at least 80 MPH because it was a good 25 minute walk to the 7-11. A “short drive” indeed. I could have sworn I heard the woman say 30 minutes about something but Kazi didn’t seem to focus too much on that lil detail. If only my nihongo was better. Argh! = D

Dinner was exceedingly cool! Why? It was a buffet! I had never seen Japanese food served buffet style before. It’s probably one of those things that is easily overlooked but I want to remember it damn me! DAMN MEEEEEE!!! Sometimes things impress me and then slip away into an uncool. This is probably one of those things. = oWhat could be cooler than a buffet style dinner? How’d about a SECOND visit to an onsen. If only there were onsens in the US. Sauna’s just don’t cut it. They simply are NOT the same. Hot water is hot water but there is something unique about hot water that’s heated by volcanic lava. It’s one helluva way to relax before dinner and a “short walk” that’s for sure.

On a note so daily adventure note – I’m remembering, hearing, and understanding so much more nihongo than I thought. It’s pretty damn wild. There was nothing that would have led me to believe this fact. Honestly I don’t understand it at this moment either. I have noticed a pattern in the language that I’d never seen before which will hopefully help me when I return to my studies thanks to Jacek’s assistance. With my iPod and the Rosetta Stone for Japanese baby I damn well better get my brain back into Japanese. Figuring out how to balance class and Japanese will be rough but it’ll be WELL worth it. I think I’m about ready for another visit to the onsen.

I’ll write one last bit in about 40 minutes. After the third visit…

Moments after the third onsen. My body is nearly all limp. My eyes are heavy and I am SO HAPPY to be back in Japan. Ahh. I honestly think some of my DNA comes from this part of the world. Though, I know my heart lays elsewhere. I could live here, but I am proven once again that I don’t want to. Ha, but it sure is a friggin wonderous place to visit.

If you made it this far you need a rest along with me. Oyasumi. )thump(