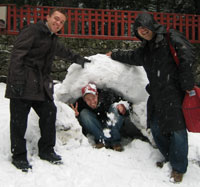 Onsen #4 and 5! How much did that hotel rock. The outside onsen was quite a sight because of the snow falling and all the ice on the trees on the surrounding mountains. No pix sadly but like Miyazaki said – such things can not be captured in a picture, they remain in our minds. Breakfast didn’t surprise me. Various fish and such. I’m still a fan of the US style breakfast. No country has come close to dethrowning the good ol US breakfast. Mmm, mmm, mmm.

Despite the snow we decided to head to Nikko. I’m SO happy that we did! Because of the snow we saw a unique side of the ‘World Heritage’ designated location. Despite Kaz’s best efforts to prove that there was a fourth monkey in Nikko – representing No Fun – he couldn’t find him in any of the carvings. Because of this we decided to FIND the ‘No Fun’. Heh. First it was a woman near the temple with the Nikko Monkeys. She was an extreme of No Fun! Kazi, Jacek, and I took turns as the ‘No Fun’ person of the day.

Nikko, despite my sighs and other sighs, is an absolutely beautiful place to visit. It has begun to shift toward tourist needs I noticed. A common store I visit now accepts Visa and MasterCard. It looks like they had enough requests for credit cards that they recognized an opportunity to increase sales from those silly tourists. Especially Americans since we now use more electronic payments than cash or check. I smiled.

Kazi and I had “what the?” slap us both in the face during the day. My “what the” was more time consuming than his because we had to go a few train stop further than we were to pick up a memory card that got left behind on the train we returned on. Kazi lost his Zippo lighter in Nikko at a hotel we rested at for a while. We don’t do that. It just doesn’t happen. For whatever reason we both did silly slip ups, but we both walked away from our adventures with smiles because both were exactly where we left them. Yea Japan! 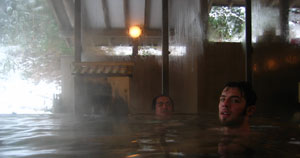 Onsen this and onsen that. How’s about providing a visual of the BEST onsen I’ve been to yet! The sixth visit for those counting. 0= ) This onsen in Nikko is OLD made of wood, and had an intense view because of the snow. I don’t know how to describe to myself or in words why this was the best of the best but I do know that when I left the water I felt at ease. My back had loosened, my mind was at peace, and my eyes could have rolled into the back of my head.

Jacek thought we’d be quick, so did I, but it was 60 minutes later when we returned to the lobby. Hoo yea, it was THAT nice and it was just the two of us. It’s rare, if not impossible to be in an onsen with only two people. Especially at a hotel. It was damn sure worth 1000 yen. Ahhh. Just thinking about it makes me feel a sigh of tranquility. 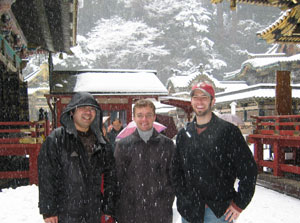 Japan. What a world it is. On the train ride back I fell back into teacher mode and played with a group of very young kids. Peek-a-boo was the name of the game. They were so cute. It all started when one little girl stared at me for a good 10 seconds. I stared back thinking she’s look away embaressd. HA! She held fast and I found myself starting to feel embaressed! EHHH!? It was worth the hazukashi (embarassing) feeling though because her friends and sister started looking and playing along. We were about 3 rows from each other so I could drop out of sight easily.

Jacek asked “You’re going to have kids aren’t you?” with a small amount of disdain. I replied saying “Um, well, maybe. I dunno, but one yo. One. Kids are awesome yo. They see the world in a way we could only wish for again.” Kids are so amazing. I do wonder what it’d be like as a father, but I know I’m not ready yet so I’ll continue playing games with other people’s kids. = D

Hmm, I think it’s time to find my out into the land of Japan again. Kita-Sakado here we come!