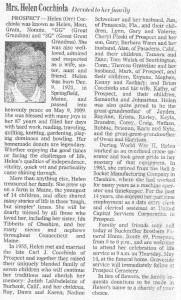 On May 9th, at approximately 1 pm, Helen (Orr) Cocchiola passed away. She was 87. She was my Gram.

For the past four months emma and I have driven to CT to visit her on a weekly basis. The time spent with her was wonderful.

Gram, as I learned from mudda, enjoyed chats with emma and me. Why? I don’t know exactly but I do know we didn’t hold back when topics typically left untouched would come up. For example: During the 2008 Election cycle we discussed issues and candidates candidly and wholeheartedly in a safe, open, and honest space. That’s how it felt with Gram no matter the topic.

She said on more than one occasion, to me, someone else, or to the world, that day to day issues should be gotten over so life could be lived. I’m paraphrasing her words but not her meaning. She didn’t seem to like it when brief troubles caused more grief than their worth. For someone with her experience, the measure of troubles was justifiable. After all, she was born in 1922 putting her at the age of 7 when the Great Depression began.

Life was meant to be lived in her humble opinion and for someone that lived as much as she did, well, she had a leg to stand on. Even during her most difficult end days she did her best to enjoy time with company and the wonders of the world. At the mere mention of the word ‘garden’ she would perk up. A sense of calm and happiness would grace her eyes and face. She loved her garden and the flowers and trees that surrounded her home.

emma and I plan to honor Gram by naming our garden – house pending – after her. We told her this plan about one week before she passed. She laughed at us with a smile.

The last full conversation emma and I had with Gram began with the intention of a simple good-bye as we prepared to drive back to NY. We quickly learned we would not say good-bye for sometime. Gram put the pedal to the metal when we walked in; we didn’t leave her side for over 1 and a half hours. It was amazing!

We told her about the recent events in Iowa and Vermont (gay marriage), children names (our choices are not very common), our last names debacle  (Gram said she likes Berman – emma was/is very happy about that), gardens and flowers, the difference between civil and religious marriage (She said “Huh. I’d never thought of it that way before.”) 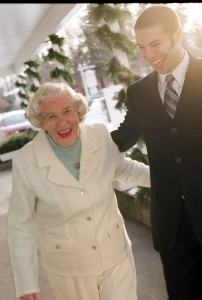 Speaking of marriage. Her attire at emma and my wedding was über rockin! (see image) Her white site and sky blue top fit in perfectly with our winter wedding. And dare I forget her demeanor and smile. (see image again) I was/We were so lucky to have her there. Gram frequently told emma and me that her time with emma’s nan, at the wedding, was wonderful and how much she enjoyed their time together. The two of them talked and talked and talked while all the young’inz bopped around the room doing whatever it is that youn’inz do.

No matter where she was in her life she was present. She lived the way I aim to live my life. She took her expereince and applied it to whatever was happening around her. In 1994 she learned to use a computer and began entering data for my aunt’s small business. It was only because of her health that she stopped.

She took in the wonders of the day ala RENT (No day but today). In fact, ha, I recall driving back from a day on the lake with the Cocchiola/Graveline fams where I drove Gram back and sang her a song from RENT – I’ll cover you.

She liked to say that the shows I did were “strange” even if it was a well known highly praised piece of theatre. I would often shake my head or laugh and describe what the show was about and/or that it was written by a professional writer. It didn’t matter, usually, what I’d say. The piece was going to be strange in one way or another. Thinking back on it, I think she was pulling my leg. But she did so by attending shows in CT and NY. Her fun pokes balanced off with her in person support made her a great critic.

In fact, I was very proud after one show she attended when she told me, bluntly, that she didn’t even realize that I was on stage until 15 minutes into the play (The King of Ireland’s Son). I was wearing a mask, along with everyone else except for two people, it covered everything but my lips and chin, but she didn’t recognize my voice or body despite the fact that I had a 2-3 inch goatee. It was one of the kindest complements she ever paid me.

She took the old and mashed it up with the new to make things happen.

At Gram’s funeral I had a difficult time crying. She had given so much and lived so fully that I couldn’t help but think how lucky we all were to have known her. I think she would have laughed at the fact that the family took an experience she had, almost exactly one year prior, and brought the family to her. 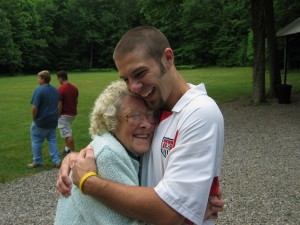 Gram was meant to attend my graduation last year but could not due to a surgery from which she was recovering. Due to her inability to travel to NY Gram and I worked out a way in which she could be in NY for the commencement – because I was speaking on behalf of the graduate class. While at home I called her from my my cell phone and then put it down on the podium as I spoke.

Coming full circle, a number of family members that live elsewhere, were on cell phones on the podium listening to the entire Celebration of Life Service. She was a trailblazer through and through.

Thank you Gram. You inspired so many, and I, for certain, will not forget how you lived and what you taught us. The world is a better place because of you.

I miss you Gram.