What do you do if you see a purse or any kind of important personal possession in the road? You’ve heard the phrase “Pay it forward” at some time or other, right?

No? Here’s the quick,  paying it forward asks the beneficiary of a good deed to repay it by doing something good for someone else.

This past weekend I was fortunate to be able to pay it forward by returning a purse to it’s rightful owner and it felt Grrreat! 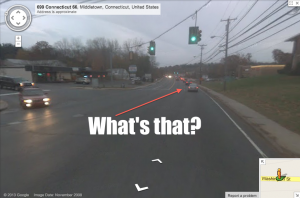 While driving through Middletown, CT on the way to the SENE Film, Music, and Arts Festival, where Rising Star was going to screen, emma noticed something on the road as we slowly moved through a busy intersection.

It felt like there was little either of us could do.

She was driving, there was traffic and it didn’t look like I could do anything to help. Imagine the image of the intersection completely filled with cars. What do you do?

I wish we could do something to help.

Yea, I’m not sure what we could do.

If I could get out…

(Opens door, grabs phone, steps out of the car and onto the sidewalk)

I’ll text you where I’m parked.

And off I went to see if I could enter traffic without getting hit. Obviously I succeeded but it wasn’t that easy. I waited for a while before I felt that the run into and out of the two lanes would be 100% safe. Lights changes, cars & trucks zipped by and all I could wonder was, “Am I going to be able to do this?”

It is awkward opening someone’s purse/wallet. An invasion of privacy? Oh yea. But if we were going to try to help there was only one thing to do, open the purse.

To our happiness there it was, her drivers license.

We knew her name!

But, we had no way of reaching her. How many people have information in their purse/wallet with their phone number in it? Those of us with a business card, sure, but that is definitely not the majority of people.

Fortunately she had a business card… For someone in NJ.

The next steps of this story took a while but they make for a great RPG (role playing game) experience. =)

Lunch at Pizzetta in Mystic

We were on target to arrive our regular ‘on the way to Rhode Island’ lunch stop, Pizzetta, and Mindy said that it was only a 15 minute drive from her place. We arrived and before we were half way from the car to the entrance a shout of “Hi!” came from a passing car.

We chatted for a bit and found out that she was in Middletown only a few minutes before us and had seen something fall off the car but believed that she had everything in the car so she kept on driving.

Note: If you think you see something fall off your car, pull over immediately, if possible, and double check that you have all of your personal possessions.

The case of the “How did a purse end up on a busy road” mystery was solved and we felt great knowing the owner had it back in their hands.

It feels funny to write about what happened but at the same time reliving it is almost as rewarding as the original experience. There isn’t much more to say. #happy #payitforward