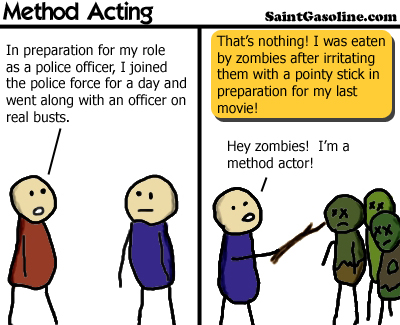 Regardless of someone’s background in acting, the ‘method’ comes up when someone is talking about acting. It’s entertaining. After a week on-set of TO DYE FOR I have a different opinion on the term.

Let’s get everyone up to speed first. A hyper quick background about the method just in case. First… Whose method?  Stanislavski, Strasberg, someone else?

The quick part – Method actors are often characterized as immersing themselves in their characters to the extent that they continue to portray them even offstage or off-camera for the duration of a project.

In Stanislavski’s system, actors deeply analyze the motivations and emotions of their characters in order to personify them with psychological realism and emotional authenticity. Using the Method, an actor may recall emotions or sensations from his or her own life and use them to identify with the character being portrayed.

…the “method” in Method acting usually refers to the practice, advocated by Lee Strasberg, by which actors draw upon their own emotions and memories in their portrayals, aided by a set of exercises and practices including sense memory and affective memory.

He’s a funny guy, check out his site and his work: Michael Barra http://michael-barra.com

By the by… If you hadn’t guessed, he was being silly.

So, acting and the method… What changed for me? Well, not much but enough that it’s worth writing about. Performances on stage and film are very different, especially in pieces with significant editing. What this means to me is that while on a film set I may be in the camera’s frame completely, partially, or not at all.

This means I could be wearing a pair of glasses and a mix of personal or complete costume because the shot is of my face only. Or, I could be wearing nothing at all except for the glasses. Haven’t thought of it that way before had you?

What does this have to do with the method? For the viewer, not much, all you’re going to see in the film is my face and a pair of glasses. For the actor it could mean much more. Some actors want to wear the character’s costume at all times and others may want to wear only what is necessary for the scene.

I prefer to be in costume at all times. I feel more comfortable and acting choices come to me more freely. Am I a method actor by doing this?

Let’s say I was shooting a scene where I was naked but the frame was from my head to my belly… Well then. Is it better to be naked while I’m waiting on set to shoot the scene or in the Green Room or during the multiple takes the scene may need?

My eyes have been opened to a new interpretation of the term and how it can be used by actors. I know it’s not holding fast to the strict definition(s) but that ‘grey area’ thing called and it wants in on the discussion. =)

What’s your take…. As a viewer? As an actor? As a director? As a crew member?

What does method mean to you on stage and/or on set or at all?