The total is $1500. Game makers Parker have changed the rules, in the UK for now, though. Going forward player won’t have to worry about their math skills. Oh no. Instead all they’ll have to worry about is swiping their plastic. Ugh. This is a sad horrible pathetic day in gaming history. )insert disgusted face here(

I know I’ll be purchasing a copy or two of the original once the announcement is made for the US market. Stupid Parker… )GASP( Am I becoming Eddie Brock!

Mayfair? Put It On The Card 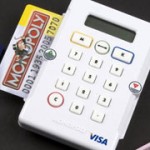 Monopoly board game players can now pay for properties with debit cards.

Game makers Parker have phased out the standard multi-coloured cash in a new version.

Players will instead use a Visa mock debit card to keep track of how much they win or lose.

It is inserted into an electronic machine where the banker taps in cardholders’ earnings and payments.

Parker said replacing of cash with plastic showed the game was moving with the times.

Mayfair – the most expensive property on the board.

Spokesman Chris Weatherhead said: “The new electronic Monopoly reflects the changing nature of society and the advancement of technology.”

The new version follows a YouGov survey of 2,056 adults which showed 70% used cash less often than they did a decade ago.

It is part of an international deal between Parker and finance giant Visa, which designed the mock debit card and its electronic machine.