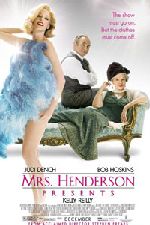 Mrs. Henderson Presents… a 1 hour 43 minute film on theatre in the West End of London during WWII. Success? To the Windmill Theatre indeed! To the movie… Not so much I sadly say. Somewhere around the one hour mark the film making team took a break and forgot what they were working on.

I began to feel a forced feeling to ‘care about her!’ and was given another urged feeling to ‘see how bad things are!?’ without hitting the mark. Judy Dench (Mrs. Henderson) was a delicious (a word used aplenty in the film). As I write I begin thinking about a story arc that was hinted at and then slammed into the viewers face only to have it disappear almost as though it wasn’t originally a part of the film. Why?

Bob Hoskins (Van Daam), bares all – utterly, and eventually introduces his wife to Dench. After a wonderful spark clash of words like two Brits only can the hidden?/revealed? romance that we’re led to believe was actually a part of the film goes poof in a cloud of Harry Potter magic.

The rest of the way I didn’t care. Someone dies… Oh I was meant to care for them? Damn, I missed that part. In total honesty the best part of the film happens during the war… The theatre never closes. Ever.

We never closed is held on a large card on-stage, ignore the fact that the English is completely in the wrong. Apparently this film is based on a book titled “We never closed” Ahh. How’d I learn this? Credits are fundamental. = ) Also, read the last line or two of the credits. It says something to the effect of “Though some of the events that took place in this film are accurate the majority of the events were ficticious.”

Movies based in truth need that extra punch of pizzaz. This film needed someone to stay alert during the entire editing process. Mrs. Henderson got lost outside The Windmill Theater for too long. Maybe the title should have been “The Windmill Theater – est.1915. On my 4 scale review (Full Price, Matinee, Rental, Let someone else rent it.) I give it a… Rental.