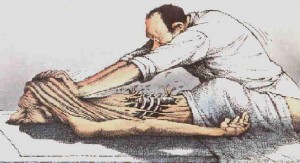 Not all massages feel great

My blooming acting & directing career was zooming along until Utah and then I more or less disappeared.

A finished feature film, Rising Star, and my directorial debut, quiet de luxe, were bopping around the film world doing their things and I found myself happily engaged with people on Twitter (mostly) and other social media sites.

Daily life was in its normal routine and then, something happened during the World Premiere of Rising Star – the schedules of 4 people came into alignment.

Were we all in an office space it could have been a challenge though its relatively easy to accomplish. When the four people live in 3 states though… Ugh.

This alignment meant emma & I would soon, we had a 1 week notice, meet my cousin, based in Washington, in Utah where we would see Alex Guerrero and hope for the best – a diagnosis. Long story short, the trip took place and a solution to a 5+ year problem was provided.

Little did I know how it would impact my acting career, online activities, and my own physical well-being.

Update: The man who helped us, Alex Guerrero is now based in Foxborough, MA in the Patriot Plaza at TB12. The official TB12 site.

Somehow, I don’t remember exactly how or when, I learned of what Rick Moranis did for his family and it’s stuck with me since.

I wasn’t in the same situation but I felt connected to the decision he made… Family is important. Happiness is important. And both require time and focus.

In 1997, six years after the loss of his wife, Anne, to liver cancer he stepped away from the acting world. Here is what he said about it in a 2005 interview…

In the last few years I’ve been offered a number of parts in movies, and I’ve just turned them down. I don’t know whether I’ll go back to it or not. I’ve been doing a lot of writing and a lot of parenting, and now I’m doing this (country music).
Source: http://usatoday30.usatoday.com/life/people/2005-10-12-rick-moranis_x.htm

He wanted to be with his children and set aside something that had yielded him significant success and staidfaction. What an amazing man. Who knows when or if we’ll see him acting again. Unlike Rick Moranis though, I do miss it and want so very much to get back into the groove.

So what have I done that is similar that I feel I can say I pulled a Rick Moranis?

Every day I spent roughly one hour performing a taxing deep tissue massage therapy that I learned while in Utah. It doesn’t sound like a large amount of time, especially when compared to a TV show and that’s where I was caught off-guard. My mental will weakened and physical exhaustion amplified very quickly as I saw the tally increase each day and week.

I have performed this deep tissue massage ~99 times since the end of September. The math on that is slightly terrifying…

That’s the first time I’ve considered how much time has been spent on this… I’m kinda sorta lotsa reeling. #gasp

The daily routine was more or less:

Because this was a nightly routine it got progressively more and more difficult. In fact, at some points the idea of the massage was enough to exhaust me to the point where I would feel as though I’d completed a full scale workout and items on the list above were ignored because I became so exhausted mentally & physically.

If the day job and other stresses in life were in a perfect place I could say they had nothing to do with the evening but  I’d be lying if I said that. There were many additional things weighing on my mind. Life felt pretty mundane for a long time and this act drained whatever was left inside.

It’s only now that the daily routine is feeling easier. This is the first personal blog I’ve written since I can’t remember when. It’s been far too long and is something I need to address.

Now that I can think clearly again words like these are finally flowing. The house projects are moving along (140 books were donated, new heater covers and most of the new baseboard trim are in place), the election is over, I’ve stopped researching film festivals for ‘quiet de luxe’ and ‘Rising Star’ seems to have it’s own forward momentum.

Waking up in the morning is actually refreshing. For months it felt as though I hadn’t slept despite nearly 8 hours of sleep.

The deep tissue massage is not complete. Not at all. It’s something I’ll probably be doing for at another 30 days or more and the thought of that is exhausting and thrilling because the ailment, scar tissue, is almost gone and that means emma and I can go for more walks soon.

I learned over these 99 days that I couldn’t take on any projects because a late arrival at home or a strange schedule on the weekend wouldn’t work because of the pain the deep tissue massage created. Pain just before bed is worse than earlier in the evening. A few projects did come to pass, a reading of two plays and a directing gig for a theatrical piece.

I’ve stepped back from the entertainment world and the Internet because emma needed me.