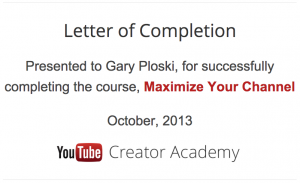 Earlier in the summer I attempted to take the YouTube “Maximize Your Channel” online course and fell victim to a major schedule conflict – vacation!

Thankfully YouTube announced the class again recently and my schedule was more flexible than it was during the summer. I enjoyed the course. It was broken into short segments and the accompanying videos were both entertaining and informative.

If you’re interested in taking it the next time it’s offered head over to https://creatoracademy.withgoogle.com/.

The Not So Good

I feelt that some YouTube jargon was skipped over in the videos/sections which left some of the questions in the quizzes at the end of each section a tad confusing. With a little time the terms will make sense but I feel as though this could have been better addressed by the course developers by adding a screenshot with descriptions.

The key piece I took away from the course was the new OneChannel Design which sets branding once and scales across all devices – including mobile, tablets, TVs, and computer screen. This is huge! It saves time and money allowing YouTubers to create great content and not have them worrying about updating their thumbnails and icons because there has been a change with YouTube’s Channel designs.

Next up I plan on taking the Google Analytics “Digital Analytics Fundamentals” course. I expect that to be a much more challenging course for me because I haven’t had as much experience with it as I have had with Google Maps and YouTube.