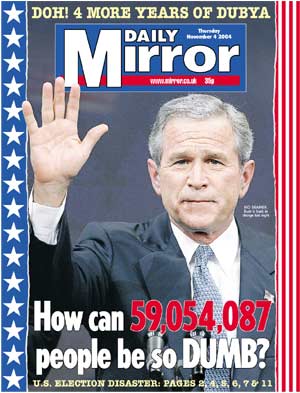 Asked if there had been signs of increased U.S. interest, Sgro said: “Not yet, but we’ll see tomorrow.”
Full Story on Yahoo!

On a whim, actually, after reading up on some exit polls, a group of friends decided to go to Boston to hopefully celebrate a Kerry win. Obviously that was not what happened. Instead, Ed, Jacek, BT, Emma, Emma, and I enjoyed each other’s company, along with thousands of others, in Boston watching and hoping for numbers to go the way of “blue”.

This, we now know, did not happen. Interesting information has been discussed regarding exit polling that took place yesterday which led to last nights adventure. One which I am entirely happy to have gone on.

Excerpt regarding exit polls:
While pollsters, who conducted the exit surveys and news outlets that paid for them blamed others for mishandling the information, some experts found fault with the data itself.

“We have an exit poll crisis,” said pollster John Zogby, whose own Election Day predictions that Kerry would take Ohio and Florida proved wrong. He said he had used the exit poll data to confirm conclusions he had based on his own polling.

Randomly the second Emma joined the group while it rained. Sheryl Crow put nearly everyone to sleep with her emotionless and slow set. Jon Bon Jovi started off strong but fell into a calming set as well. Accoustic CAN be energizing but they seemed to have none to give. Interestingly the Black Eyed Peas had everyone dancing and pumped up when we arrived at 930ish. Too bad they couldn’t play all night.

So the evening was a scratch but the adventure was great. How many times will I do this in my life. Once is a great number, twice? Hmm, who knows what the future may hold.

It wasn’t until 5pm that I saw my place in NY. The drive back was easy because the road was empty, but my mind was far from empty. Fear of someone else’s morality imposed on me truly scares me. I’m capable of determining what is moral without Bush’s religious decrees imposed upon me. 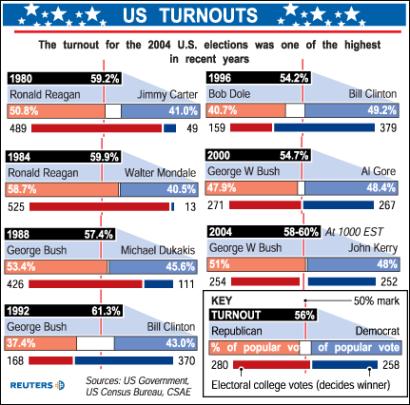 I worry where we’ll be in 4 years regarding science, Roe v. Wade, the Patriot Act, etc. Will we be free with the loss of additional freedoms or will he prove me and the other 48% of America that don’t believe in him wrong? Time will tell.

(Referring to the image to the right.) I am extremely disappointed by the number of voters that actually voted. It appears that we’re looking at an apathetic America still. Only 58%-60% of the public voted. One word Ã± PATHETIC. I had said to many friends that if a mass of people went out and voted and Bush was chosen I would stand behind the decision without question but this… these numbers are nearly IDENTICAL to the numbers since 1980. After all the press, campaigning, etc, etc, etc.. 58-60% is all we could muster. Pathetic America. Pathetic.

While not trying to sound pessimistic, yet knowing this is going to be apessimistic statement, “We get what we deserve because we get what we choose.”