I feel like I’m a pretty considerate guy. When I’m out with friends I’ll try to make their experience as positive as possible. Maybe I’ll refill their glass of water, hand them their coat, etc. If I’m at someone’s house it’s pretty easy to pick up some plates as I’m going into the kitchen. No big deal, right?

And yet during my first two weeks in Portland I learned how I’ve been less than considerate of others on public transportation. The kindness offered was so simple and yet it has me blogging about it. Let’s go for a ride together! =D

Sitting Alone with an Empty Seat 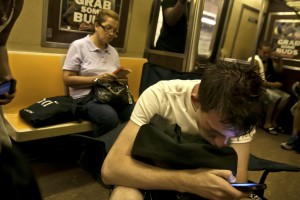 That is one lucky bag and one unlucky dude.

As it happened it took me a minute to realize that the surrounding environment may have had an impact on me and I didn’t even realize it. Sadly I’m not talking about a positive impact.

You see, growing up outside of New York City and then living a stones throw away I found that getting around with blinders on was simply the way things worked if you wanted to get where you were going with minimal fuss.

It works and it’s not considered rude or obnoxious. It’s just the way it is. Don’t bother me and I won’t bother you. After all, you’ve got something going on and I do too… Right?

Well, that’s what I’d been used to for the past 11 years while living in Westchester County. I can say at times I thought it was the bees knees and other times I longed for a connection with someone else. A random conversation with a stranger that would end when one of us exited the train.

Looking back I wonder how many times I was sitting on a Metro North train in one of the 4 seat sections when 2 or more people needed a place to sit and I just kept my head down knowing that they’d see me and would either A) move along or B) sit and try to avoid me. Most often they’d walk away and look for another place to sit but if the train was leaving soon the odds were more evenly split.

What could I have done? Two people in Portland recently taught me another option. 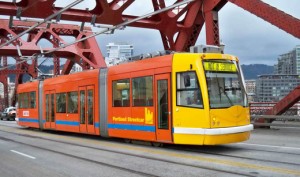 After boarding the Portland Streetcar emma sat down and I stood next to her because we couldn’t find two seats together. By the time we arrived at the first stop we’d been asked by another rider if we wanted to swap seats because they were sitting alone and saw us together.

“Of course!” was the thought that ran through my mind. “That’s how we should treat each other on public transit. Wait. A. minute. I’ve never done that before…” My thoughts trailed off as we thanked our fellow rider and took our new seats and watched them take our previous seat.

o.O How had I not done this before. How had the logic of it all made so much sense and yet the thought had never come about?! What is going on in Portland that isn’t happening where I grew up and lived. Maybe it was an outlier experience?

“What. The. Truck?! This is really happening. Again?! I need to write about this and I need to do better and I need to be more aware of my surroundings.” Thoughts that have danced around in my mind for about a week now.

There may be something in the water here in Portland or the two outliers who ride the Streetcar happened to offer us their seats. I don’t know and it doesn’t really matter. There’s a simple way to put all of this.

Another way of putting it might be to look around and see what’s happening. If you can help someone have at it. You’ll make their day and there’s a bonus, you’ll feel great too. It’s true. You’ve even got science on your side.

Happiness as a collective phenomenon
Psychologist James H. Fowler says his research shows that we should think of happiness as a collective phenomenon. Researchers are increasingly turning their attention to happiness in communities and institutions. Dr. Barbara Fredrickson says that “by creating chains of events that carry positive meaning for others, positive emotions can trigger upward spirals that transform communities into more cohesive, moral and harmonious social organizations.” Dr. Martin Seligman and his colleagues at the VIA Institute on Character are studying positive institutions. – source

So, thinking back, have you had an opportunity to help others and realized later how you could have helped? Please share below so I/we can learn from you. #hugs