And soon the semester will join me in a cheering "HooRAH! HooRAH!" Soon as in, heh, 3 days. Nice lil number ’tis – three. 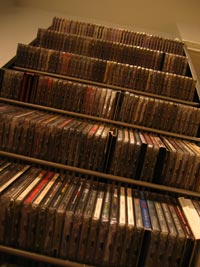 I’ve done it! I’ve finally compiled all my music into one place digitally AND into one place physically! Happy happy joy joy! Sometimes I try to do too much in too short a time I think. Importing every CD was excessive but I think it will prove to be a nice distraction on long trips. )cough cough( Japan )cough cough(

Ths funny thing about life is how a thought enters your mind and within a week, an hour, a few minutes you find that someone has already thought the thought and put your idea into practice. Life is GRRRRRRRReat in that way. As I mentioned above the time it took to rip my CDs was abundant. So I thought "A service to rip CDs would be a great idea…" BAM! http://www.ripdigital.com/ I wouldn’t pay them for the 300+ CDs that I have but others appear to. Haha. Rock on ahead of me peeps. Nicely done.

Families are entertaining. Simply put, they are our "reality tv show" for a day (or more) during the holidays. This past Saturday one of the first things I heard from Emma’s uncle was "Oh great! Now he’ll think we’re a bunch of a$$h0l35." In actuality I thought it was cool that four people arrived wearing hats that were Santa-like with a taste of a Russian influence. They weren’t decked out in Santa outfits. Hmm, maybe I would have though him to be a… Haha. Nah. Anyone celebrating and having fun during the season deserves a smile of acknowledgment back. It’s rough dishing out the energy only to have people snicker or snear back at you. WTF snickerers and snearers! Grr!

The day was great fun. Emma’s rents were worried that I’d be bored or uncomfortable. BAH! Never! Well… I knew I wouldn’t be uncomfortable there. I had that sixth sense thing. Shh! Don’t tell anyone. Santa even got me something and dropped it off in NJ. HOW DOES HE KNOW! HOW!? Spidey every day for a year on my calendar. Thanks Santa! Domo domo domo. I even got to learn about some new techniques to focus on the "core". Her pop has been reading a great deal it appears. = ) All the better when a copy of the text lands in my lap. Bingo!

Why is it difficulty to write when happy thoughts are bouncing around in the mind? (rhetorical shitsumon desu!) I’ve sat in front of this screen trying to write out my thoughts but I sit and stare. Is this what happens when stress fades to the minimal side of life? (Refer to the previous parenthesis.) I don’t mind it I t’ink. There is always some amount of tension or stress within. I guess I’ll just have to SUFFER through this AWFUL time in me life. AWFUL! RETCHED! BLEEEEEEH! Ha. "Sideways" Must see "Sideways" before the weekend clobbers me on the head because RotK will have my attention for 4+ hours with many a folk on Saturdee. The latest invite list requires that I be there… Especially since I suggested it. YEA TEAM!