In the summer/fall of 2010, for 45 days, I took part in what has fast become one of the most popular ways to raise funds for a personal creative project.

I had been planning to try Kickstarter with a project of my own but life got in the way and I didn’t feel I was ready. Time passed and some things changed.

Another project I was involved in found its way to Kickstarter. Quickly. Very quickly. This time, though, I would not be alone.

In my personal opinion we rushed in, almost too quickly, and I do not believe we were fully prepared for what was about to unfold. If more time was available and planning had begun earlier in the year I believe we could have spent more time engaging and building a following.

As it was, we didn’t have that opportunity. If we were going to do it, we had to do it ASAP. It was a do or don’t type of situation. We chose to do. And off we went with one 5 hour meeting behind us we had our plan and give backs ready.

Something many Kickstarter’ers who have succeeded advised me/us was to be prepared: this is now a full-time job. 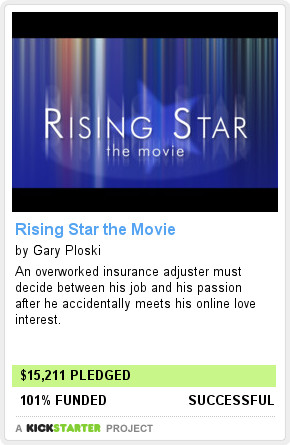 I knew this already based on what I’d seen in other campaigns I had followed and supported/helped.

But what they cannot prepare you for, in their welcome to the club hi-5 heads up way, is that there are incredible lows that will be felt. It will feel as if there is no point in continuing. The weight of the campaign will stress you out and it will keep you up and night and enter your dreams and/or nightmares.

What Kickstarter’ers will do, during your campaign, is support you.

They know what it takes to finish the race and, if you are actively working toward your goal, they will be there to help you with personal insights, networking opportunities and any number of other possibilities. Don’t be afraid to ask for help.

I did and they did.

Forty five days later “Rising Star the Movie” joined the ranks of successful Kickstarter campaigns with 101% of our goal raised and a group of backers who believe(d) in us!

Oh, there is another piece of the pie that former Kickstarter’ers cannot prepare you for… The celebration. I can easily remember exactly where I was and who told me that we had reached 100% like it was yesterday.

Many things happened during the campaign and after that have made me think about how our campaign did and did not succeed and how Kickstarter could be improved.

Below I’ve written some thoughts for those interested in running a campaign and for the Kickstarter team. Like everything in life, there is no one way to do anything. These are suggestions and each suggestion could be tweaked or removed based on the campaign being run. I’d be thrilled if you posted your ideas or successes in the comments. This post is as important as the campaign because it is my responsibility to give back as those who went before me gave back.

Build a well before you need water

Before beginning your campaign network with people who have been a part of the Kickstarter world. Ask how they promoted their campaign, reach out to Internet and traditional radio shows and ask if they would be interested in speaking with you. Yes, do this before you start your campaign. If you can coordinate a series of dates that tie into your campaign you’ll be a happy duck.

Let everyone know what you are about to do in-person and online. People want to be supportive but they need to know your project exists.

If you can guarantee funding from certain people consider the following:

This isn’t concrete data but it was the type of reaction I received from friends and family when I promoted it.

If you can line up funding before the campaign launches you have three options:

Each carries its own benefit and a risk. Consider each approach before launching your campaign.

Do you blog? Get to it. Promote your project for longer than a newsfeed item. What does that mean? Your blogs will be searchable and will carry more weight than your tweet or Facebook post in search engine algorithms.

Most importantly, engage in the way that you engage. And if you are not the only person involved in the project, be sure to remind everyone involved that the success of the campaign is up to them as well as you. A team standing together will create tremendous buzz in the social media world.

It’s easy to say now because we’re done – have fun and enjoy it while you can. You will absolutely meet amazing people as you talk about your campaign and project.

Since the completion of our campaign (September 2010) there is more information available, a funding graph (see below), within the Admin section but, in my opinion, there is not enough.

Every day there is a change to the backer count, total and average amount needed per day to reach the goal, number of backers at each funding level, number of backers who increased their financial support, etc. It may seem superfluous but it is incredibly helpful information.

Adding to that… Information on inbound web traffic would be incredibly helpful.

While running a campaign someone might spend more time on Twitter if they know that 80% of their backers were redirected from tweets versus their posts to any other social media site.

Is Kickstarter a social site as well as a crowd funding site? At present the answer is “No.” But if that were to change it’d be the ballgame. Here’s why: Cream could rise to the top and more projects could be successful.

If friends know what friends are backing it is likely they will A: look at the project and/or B: fund the project as well. This is because friends generally have the same interests. This type of tipping point event would push the cream to the top and help people find new projects to back. Without it, like now, every user has to find every project to back on their own. This hurts the site and the campaigns.

If that isn’t a possibility then something akin to Amazon’s “…you might be interested in…” emails would be the next best thing.

When you sign up for Kickstarter you will soon begin receiving a monthly email with recommended projects. That’s fine, except you may not be interested in any of them for any number of reasons. If each user could select which type of project they’d like to hear about it is more likely the email blasts from Kickstarter will result in more financial backing which will improve the platform and the project success rate. 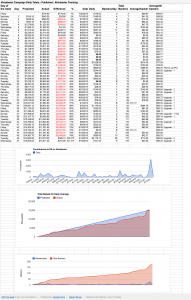 In an effort to track our campaign I created a Google Docs spreadsheet. It is far from perfect and required manual interaction on a daily basis but it helped us to see how well we were or were not doing financially and with supporters.

You’ll see that one of the graphs I created mirrors the “Funding Graph” displayed above except I also included a ‘projected’ path as well.

The idea behind this was to keep an eye on what the numbers would look like if fund raising was smooth from beginning to end – nearly impossible but a gauge nonetheless.

I probably missed data points that would have aided us throughout the campaign but this did tell us much more than was available in the Admin panel.

Click on the image or here to view the spreadsheet.

Where will the money come from?

I was guessing how many people we would have already known before starting the campaign. Turns out I was pretty close to hitting the bullseye. Taking into account the major fundraising players, 5 people, we knew 85% of our backers.

This means 15% of our backers we never knew before. That’s great news! That means we indeed experienced the crowd funding experience.

I would prefer to know fewer people of course, but believe that a first time project, like ours was, is going to yield this type of result. People who know you and trust that the project will be completed are very excited to support a campaign. It may take a few email blasts, phone calls, subtle hints, etc. but they will come through.

You too can fund your project via a crowd funding site like Kickstarter. It takes time, patience and planning. Determine what your campaign is about. Is is about money, money and supporters or supporters. What ‘success’ means is up to you.

Don’t forget, there are other crowd funding sites that offer different experiences. Do your research before you pull the trigger.

Heads up, our campaign ended in September 2010 and we are still working on it.

Keeping promises to backers is vital and that is our next step now that the film has wrapped and the editing is underway. It’s going to be exciting to tell every backer how important their contribution was and that they helped to make it happen. I’m thrilled to have so many people to share this project with on an on-going basis.

I am absolutely certain that I forgot to include a number of items in my write-up for a number of reasons. If you have a specific question please ask me in the comments or via your preferred web based medium.

I hope this makes sense to those who are interested in running a campaign and is helpful to the Kickstarter team. The platform is wonderful and my suggestions are not meant to take away from it. On the contrary, each of the suggestions above will hopefully help to create an even more effective platform.

Update 02/17/11 – Another topic I considered noting in my post, but decided not to due to length, was the lack of means to promote one’s Kickstarter campaign through the Kickstarter channels. For example: How do I get my project featured on the front page or how can I be included in the email blast sent out to all subscribers?

I learned, last night, that IndieGoGo.com offers an option at the bottom of every campaign page to “feature it.” Clicking the link brings you to a form where you can explain why the campaign should be featured. Pure, gold.

These simple steps inform the admins of IndieGoGo to look at the campaign to consider it for their front page. This is huge! During the Rising Star campaign I tried something, I asked our fans to write to their admins via the contact page explaining why Rising Star should be featured on the front page, and was told that we could lose all our funds and have the campaign shut down.

Not a bad idea, right?

Apparently not. It worked so well that I received word of the “spam” within a handful of hours. If the “feature it” option were available to me/us we might have been featured on the front page. Who’s to know. Hats off to IndieGoGo.