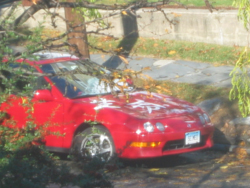 Thinking forward I’m extremely excited about this weekend because of all the opportunities. Alice is joining me for a long overdue ‘hang out’ together. On tap first is Woodland’s game in New Canaan where I’ll see Meg do her keepah thing with excellence. Hoo ha! After that it’s a day filled with driving, stopping, rehearsing, eating, and hanging. Sunday will be pretty damn similar except NY comes into the fray. NI!

Mr. Trent and I have some plans for the rest of the world at http://rememberinghypatia.com – check it out. As he wrote in an email to me quoting two very famous men from history: Shakespeare and Alexander.

"Let Every Man be Master of His Time." – Shakespeare
"What Good are Possessions to Me if I Achieve Nothing?" – Alexander

It is time he received the notoriety he deserves. Here’s to the Humanist for your support of my best friend. Together we will make BT KNOWN. 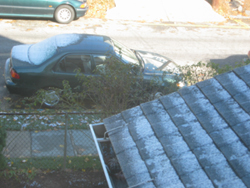 Hehehe… it snowed. At 12:21 it’s still on the porch room outside my room! Heheheh. Though, it’s not on my car anymore. Alas.

Completely confusing me was a post card I received yesterday stating "Talk to you again some time." from someone that recently said "I don’t need to speak to you…". Um, yea… confused.

And so Alice is late so I must act surprised. No, that’s actually pretty much on the mark for things "Alice" related. Good thing I told her to be here 1 hour before I planned on leaving. = D Figured ya out Alice! BWAAAHAH! You’ll never know if I’m tricking you or not! BWAHAHAH!