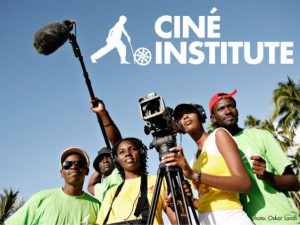 Two shorts were screened, the first was about a girl involved with the husband of another woman and the plots his wife and his mistress take to get him to go back home and the second was about the tension between two relatives and where voodoo fits into the mix.

Personally speaking the voodoo element of the story was fascinating. Here in the USA voodoo is spoken of as a silly or ludicrous practice by, I think, most people. And yet in the film I saw how much belief there is in the religion as well as how powerful it is seen to be by the people of Haiti.

What exactly is Ciné Institute?

Filmmakers from around the world have been traveling to Haiti to teach students the art of filmmaking. One of the ‘eye pop’ details is that the students enrolled do not pay anything to be a part of the 2 year institute and yet the organization is already in the black because of it’s business structure and revenue model which means we are bound to see more films by Haitian filmmakers at festivals and soon enough on big screens all around the world. =)

Thanks to Ciné Institute I was able to experience Haiti from the eyes of its people.

Why is Ben Stiller is involved? Ben Stiller Supports Haitian Filmmakers with the Ciné Institute