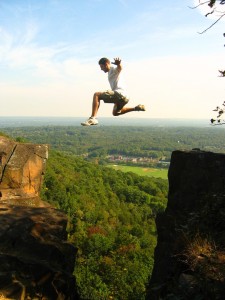 Going to the Extreme

You’re probably thinking “This guy is an assho”ooooold on a minute.

Let me get to the point by saying it again.

You’re Ugly and Stupid. I’m Hot and Brilliant. Oh, I forgot to add, you are worthless, can’t do anything right, should just let someone else do your job, look in the mirror and see what everybody else sees because you’re lying to yourself…

The quick answer is, “Yes those are extreme statements you narrow minded sod, sheesh.” But more to the point, why the blue blazin’ tarheels am I asking?

First a note before I get too far, you’re not ugly and stupid. And I’m not hot and brilliant.

If you’re still upset about the hurtful and extreme words above, it’s okay, count to 10 before letting your emotions get the better of you. Breath in… Hold it… Breath out. (Repeat as often as necessary.)

Recently Ali Berman (http://aliberman.com) and I watched a fantastic film called FAT, SICK, AND NEARLY DEAD about a man (Joe Cross) who eats drinks nothing but juice for 60 days to see if it will help him with a health issue as well as to lose some weight. He called it a juice fast despite ingesting more nutrition than… Hehehe, well, yea, than most people do.

It was incredibly inspiring!

Thanks to a birthday gift juicing became a possibility for us soon after watching the documentary. We were both full of anticipation and excitement to try our own juicing fast. We chose 7 days versus his 60. Reasonable, right?

Before we started we asked ourselves: Would we like it? Would it be filling? How much would it cost?

There were so many questions we knew to ask but there was one that neither of us thought much about that really caught my attention: Can I/we live an extreme lifestyle?

I may be wrong but I believe that unless there is a need in one’s life very few people will live an extreme lifestyle. What do I mean?

I’m going to use the 60 day example because it’s a short enough period of time but not too long that it’s unreasonable, to see if the average person is extreme.

Be honest now, if you say yes to any of the questions above you’re one of two types of people: awesome or a liar.

By our very nature we human types operate within a routine schedule. A Monday through Friday schedule and a Saturday and Sunday schedule. This works because it’s a cultural norm in the USA and other countries but it also helps to differentiate the work day versus the personal day – both of which have their own needs.

Ali kept track of our juicing experience and posted it here on Livin Veg (http://livinveg.com/2011/12/31/my-experience-with-juicing-inspired-by-fat-sick-and-nearly-dead). We <3’d and yet, grew tired of the experience because of, I think, two things:

HA! Who am I kidding. Of course I need to say more that’s the whole point of this post.

The juicing was both good and bad which is to be expected when trying something new. REMEMBER THIS! /life-lesson

Some of the juices were great for an add-on to a meal, a few didn’t taste all that good and then there were the full on meal experience with great taste. Note: I happen to be drinking one of the last examples as I type this entry.

What I learned about juicing…

It’s definitely for me but I do not need to live the extreme and have it every day because that’s not me and it’s not needed in my life. It takes a certain kind of someone to do any sort thing in an extreme state for a long duration of time. I do my best to find ways to incorporate new things, like juicing, into my life to maintain a (my) balanced lifestyle.

My diet is now enhanced because of the attempted 7 day juice fast despite ending it 5 days early. Someone might say “Whoa. Only two days? You completely failed at that attempt.” and this is where I need you to open your eyes because it was not a failed experience.

I tried to do something with an arbitrary goal in mind – 7 days of juice fasting – and went on my merry way. During the experience I learned a number of good and bad things about juicing. After the experience I relish the idea of getting a juice when I’m out and about. Soon enough it will be incredibly easy because Starbucks acquired Evolution Juice in November 2011. HFCIT! Check it: “Latest Starbucks Concoction: Juice” http://online.wsj.com/article/SB10001424052970204358004577030112155716538.html

Even more, each week I anticipate a juice dinner or two or three because it’s refreshing and I feel great afterward. I still treat myself to a pastry every now and then when I’m out and about. Heck yea. I’m better for the 7 day juice fast that only lasted 2 days. My diet earned enough experience points to level up!

Failure… Not by a long shot.

Had I not attempted the juice fast I would stamp it on the web that I failed because I didn’t even try.

I don’t consider myself to be an extremest though in someone’s eyes I’m sure I am.

What do you think?