Back in July and August we sent to the Waterbury Republican and the Prospect Pages our Wedding Announcement. Why the delay? We figured the hot time of the year for weddings was not the winter but rather the summer. And so, on or about the 6 month mark of our marriage, we went the route of the traditional announcement. Something we avoided nearly entirely during every other part of our wedding. 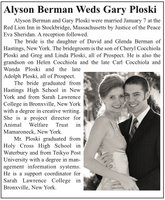 Alyson Berman and Gary Ploski were married January 7 at the Red Lion Inn in Stockbridge, Massachusetts by Justice of the Peace Eva Sheridan. Areception followed.

The bride graduated from Hastings High School in New York and from Sarah Lawrence College in Bronxville, New York with a degree in creative writing. She is a project director for Animal Welfare Trust in Mamaroneck, New York.

Mr. Ploski graduated from Holy Cross High School in Waterbury and from Teikyo Post University with a degree in management information systems. He is a support coordinator for Sarah Lawrence College in Bronxville, New York.