One year ago I was coping with the fact that my car had been found! As it turned out it though was found empty. Striped. No engine, no transmission, etc. It was… Totaled.

I was now a part of the “I had my car stolen” club. 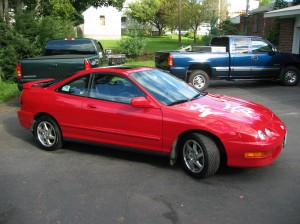 I’ve been thinking about the experience lately. In fact, I’ve looked into the garage where I parked it, the thieves stole it, and the cameras recorded it, twice over the past week. Prior to that, during the past 11 months or so, I can honestly say I do not remember the last time I looked into the parking garage. At the spot.

Without a conscious effort to wonder why I looked into the garage I would have left it at that. However, I peered back ever so slightly with a thought about my Integra and… Ding! “That was a year ago. My car was stolen a year ago!” Holy moly.

I have not had a car for a year. The impact?  Not too bad.

There has been one, maybe two, instances where emma and I needed a car at the same time. That’s it. Absolutely amazing. In both circumstances we navigated our needs and resolved the trouble. Yup yup yup.

Is it because I walk to school/work every morning? Maybe.

Is it because she only drives to the office 3 days a week? Possibly?

Is it because of the kittens? Erm. How long have I been awake… Brain mushy.

Shifting topics, sort of… If the mind prompts the reflection of the theft of a car I can understand why the loss of a loved one might is significant on the first anniversary of their passing. The first year without someone or something that has been a consistent part of your life is traumatic.

Thanks for all the good times 1998 Acura Integra GS-R – SEIMEI.

Looking back, here are the posts from 2008 about the theft, recovery, and reflection of the theft.